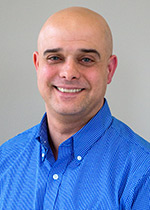 Shane King is an Application Engineer in the Building Automation group. He recently shared some insights on his tenure with us.

In February 2000, I joined the AC drives group at MagneTek, in a technical support role. During that year I was asked to develop the first training class for the V7 Drive (or GPD315). Shortly after, MagneTek became part of Yaskawa. They had not yet developed a class for the V7 Drive, so they used the content I created and I only taught the class one more time.

Along with my brother, I started a semi-professional football team in 2007, the M&M Timberjacks, out of Menominee, MI. We built a highly successful organization and had four years of fun and hard work. We sold the team in 2010 after winning the organization’s first championship.  Life was just a little too full and something had to go.

During 2008-2009, I developed a retrofit kit for replacing the VFDs in GPD505/6/P5 configured and bypass packages with E7 and P7 products.

I joined the Building Automation group in 2011 under Joe Twohill. Since then, I’ve been providing quotations and specifications for our fine distribution channel partners.  Over the last 8 years I have:

Most importantly, I met my wife in 2004 and we have four wonderful children, Tyler(13), Alex(9), Cora(7) and Rachel(3).  When I’m not at work we are at church, bible quiz tournaments, tae kwon do, or hockey practice/games/tournaments, and homeschooling.