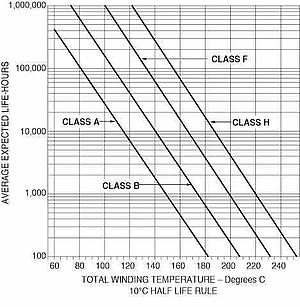 There are many misconceptions about motor service factor (SF) in the industry. Some feel it is meant for temporary excursions into overload conditions, others consider it to be an allowance for permanent overload. The truth is that it is neither. NEMA Standard MG 1-2014: Motors & Generators defines service factor as: "A multiplier which, when applied to rated power, indicates a permissible power loading that may be carried under the conditions specified for the service factor."

According to NEMA's theory of SF, a motor is thermally capable of overload to that point within the insulation class at normal service conditions.

Since any increase in load will increase the current, the SF overload condition will raise the operating temperature of the motor, which shortens its life. In fact, every increase of 10°C decreases the expected life of the motor winding by half, no matter what the cause-e.g., overload, poor ventilation, low voltage, or high ambient temperature, to name a few.

Although motors convert input power (electricity) into mechanical work very efficiently, they, like all electromechanical devices, waste some energy in the process. This costs money and prompts lots of discussion about motor efficiency among end users and utilities. Motor efficiency can be expressed as:

The losses (L) constitute the inefficiency. Friction and windage account for some of these losses, but most of the inefficiency is due to core and winding losses (i.e., dissipated heat). The largest contributor is the winding loss, which can be expressed as:

The winding resistance (R) remains relatively constant and is a smaller factor than the load current (I). As this equation shows, the heat producing losses increase by the square of the increase in load current. The increase in current compared to load is nearly linear over short changes, so for a SF of 1.15, the load current will increase by ≈ 15%. The additional watts produced will be 1.152 or 1.32 (a 32% increase), which will result in a similar increase in temperature. Table 1 shows this increase for several examples of totally enclosed fan cooled (TEFC) motors. TEFC motors will also have a greater increase in bearing temperatures than open motors because of the way they are cooled. 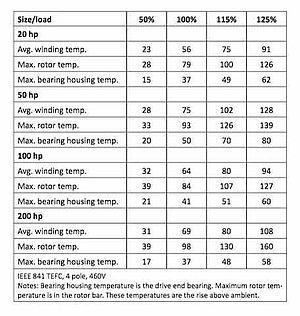 If the theoretical life expectancy of this motor was 10 years, it could be expected to last 1.5 years when operated continuously at the SF load. Although many other factors may also affect motor life, this example illustrates how important temperature considerations are in the proper application of the equipment.

A motor with Class F insulation can be rewound with Class H to help accommodate the higher temperature. This will improve the overall life expectancy of the motor, but will not lessen the impact of the overload condition. For instance, it may increase the theoretical expected life to 15 years, yet at SF the motor would only last 2.3 years.

As mentioned earlier, NEMA's definition of SF contains the phrase "normal service conditions." These conditions include operation at rated voltage and frequency, at a maximum of 40°C (104°F) ambient, and a maximum altitude of 3,300 ft (1,000 m). Only under these conditions is the motor capable of handling the full SF overload. According to NEMA, the motor can perform successfully at ±10% of rated voltage, it adds the caveat that operation at other than rated voltage may affect performance. SF is included in the performance that is affected.

Another way to view the SF is as protection for the motor's performance and life expectancy during excursions into other than normal service conditions. If a motor has a SF of 1.15 but operates at rated load, for instance, lower than rated voltage will not have much negative impact on performance. Since motors rarely operate at rated voltage, it is a poor design choice to have the motor operate continually in SF.

If an application requires 110 brake HP (82 kW), it may be tempting to reduce the initial cost of the project by using a 100 hp (75 kW) motor and operating it in SF. A much better choice for this application, however, would be a 125 hp (93 kW) motor. Correctly matching the motor to the load will help assure efficient, reliable, and low-cost operation. The motor will also last much longer than one continuously in SF. Further, since many motor designs achieve peak efficiency near 80% of rated load, it is best practice to increase the rating of the motor rather than operate continuously in SF.

Although a service center may not get involved in the motor applications' design and specifications, it is good to make them aware of motor failures associated with problem applications. Often, they can redesign a motor to meet the requirements of the application or provide a suitable replacement. 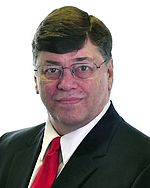 Many service centers may also be able to reduce the winding loss and temperature rise under a given load when they rewind older motors. Many of these motors have ample room in the winding slot for a larger wire size, which will allow operation at a higher overload or SF. However, keep in mind increasing the wire size or improving the temperature rating of the insulation system will not increase the hp (kW) or torque. Other factors such as winding turn count and coil pitch must be changed to accomplish this.

By misunderstanding the proper application of SF, the system designer will often reduce reliability and increase operating cost for the sake of a lower initial project cost. A little foresight and a small investment increase will pay dividends for the application's lifespan.