Webcast teaches power system harmonics and best practices for harmonics mitigation and their relationship to IEEE 519, which guides the design of power systems with non-linear loads. The 2014 revision of IEEE 519 clarified language subject to interpretation and misinterpretation.

By: Larry Gardner and Christopher Jaszczolt

VFDs save motor energy, save money, reduce wear and tear, and improve control performance. VFDs draw current in a non-sinusoidal way resulting in current harmonics, along with other commercial and industrial equipment and devices. Conventional VFDs use input rectifiers to convert incoming three-phase ac power to dc, and store that dc power in capacitors, referred to as a dc bus. The business end of the drive then uses high-speed switches to to send pulses of voltage to the motor. The switches, called insulated gate bi-polar transistors (IGBTs), turn on and off in a sequence the motor interprets as a sine wave. By varying the frequency of the pulses, the VFD can vary the speed of the motor.

Harmonics occur when the current waveform is distorted. 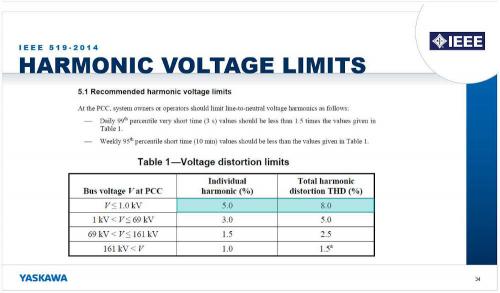 IEEE 519-1992 was long; 2014 is short, only 10 pages of real content; 1992 was vague and subject to interpretation (and misinterpretation); 2014 is clear, making clear that recommendations apply to the system and not individual VFDs.

IEEE 519 recommended harmonic limits vary with time and with point of common coupling (PCC) voltage. For most industrial or commercial users, though, 5% is a safe limit. Webcast gives an analogy to explain why 5% and gives an example of what that means.

A question-and-answer session is expected after the webcast to answer audience questions. Those registering for the webcast also can ask a question during registration, even if watching the archived version.