49+ Years of Opportunity, Joy and Family 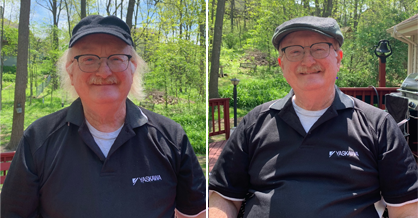 Tim's COVID look and after a haircut!

Opportunity. As Tim Wallschlaeger reflects on his five-decade career (his last day at Yaskawa was May 28, 2021), he thinks of all the opportunity he had to grow as an engineer, teammate and person.

“Yaskawa gave me the opportunity to do anything I wanted to do. I could’ve been a salesman, in development, wherever. It was good. When you get to have the choice to do what you want to do that’s pretty good stuff. And the company adheres to that today. I see a lot of people come up through the ranks and I see the opportunities they have, too,” Tim said.

Tim also had the opportunity to be himself at Yaskawa . . . within reason, he said.

“How do I summarize who I was or how I was? I guess I wasn’t always, um, correct,” he explained. “I liked to keep things light. Not take things so seriously. I maybe leaned too far that way once in a while depending on who you talk to. But, that was always part of me. I was the class cut up. There’s risk and rewards to that. The reward is the other kids laugh. But, I’d also be the one spending time in detention when everyone else was going home . . .  so to speak.”

“Engineers are a serious group. I have a bad habit of saying something wrong with a straight face and people believing I meant it. Then, later you have to clean up the mess. But, it was all good.”

Tim started his career with Louis-Allis in November, 1972. Soon after the Allis family sold to Litton, which was growing into a large conglomerate at the time. Magnetek bought Louis-Allis in 1984. And, Yaskawa spun out of Magnetek in 2000.

“I’ve worked for 4 or 5 companies over the years. At one point, one of the HR folks had me write out a personal evaluation. You know, back then it was on the carbon paper. Took me forever. Not only did I have the different companies, but I served in so many different roles. Seemed like every month I had a new position or a new boss,” he explained.

He also saw a lot of change in the industry.

“When you look at all the different technologies over 50 years – I went from experiencing 10,000hp motors all the way to being able to do computer programming and everything in between from electrical engineering to marketing and training. In the early days, you were a jack of all trades. We used to have slides and overheads. But, it was a good experience.”

“Now, you see what people can do with drives and servo motors or whatever – the job never gets dull because there’s always a new software, hardware that is introduced. And you get to be part of that. Part of a company where a lot of things are interesting – for an engineer at least.”

The roles and the bosses came and went until Tim settled into his product marketing role with Yaskawa in 2000.

“They asked me if I wanted to stay with Magnetek or go with Yaskawa. I went with Yaskawa which turned out to be a pretty good decision,” he said. “It’s been a very good ride. We’ve come quite a long way in 20 years,” he said. “We’ve grown from an almost zero brand name into a fairly large organization.”

“Probably the best part of the company that will stand out is the people. Let’s start with Mike Knapek. He has always been a friend. He gets a kick out of me. I get a kick out of him.

And, there were others.

“Same thing with Bernicky. He helped me a lot. Twohill. Lemerande. I never really worked at any other companies, but new people come to Yaskawa from ‘dog-eat-dog world’ places and they are surprised at how tight we are here,” Tim said. “They see how everyone has each other’s back. That’s why I was always comfortable. I always felt appreciated and trusted. Mike and Mark, everyone really, keep it that way.”

“The attitude and approach Tim brought to Yaskawa and the people will last a long time”, Mark Bernicky, Senior Vice President of Drives at Yaskawa.

“I can think of few people that have been consistently pleasant, funny and helpful for 49 years. His ability to entertain may be one of his best qualities,” Mark said. “We all learned early on to include Tim on any customer dinner. If there was ever a lag in any conversation or we need to liven things up, all any of us would have to say is “so Tim…” and away it went.”

“With that said, we will all miss the entertainment and laughter with Tim in the office, but I cannot even begin to recount the numerous times Tim has helped so many of us with technical aspects of this business we are in.  I am not sure which I will miss more”, says Bernicky.

Tim said it took a few years to wrap his arms around the idea of retiring.

“It finally got to a point where you knew – starting several years ago – it was getting to be time,” he explained. “People would ask about my plans. I kept giving vague answers as to what I was going to do. I had no real reason to want to leave. The people. The work. You don’t realize how entertaining it is. During the pandemic, I’d work out of my kids’ bedroom, you realize how much you will miss the job. Miss the people.”

Other than being able to spend more time with his wife Abbie and his grown children Sarah, Adam and Ben -- Tim doesn’t have anything special planned for retirement.

“No travel. No cabins. I’m kind of happy to have time to myself and do what I want to do,” he said. “All of the sudden it’s a feeling of I can do anything I want. But, there’s not a lot I need to do. I don’t have a bucket list. I think I will be content just to be doing nothing.”

“I like to do outdoor things. Parades. Festivals. Flea markets. People watching. Maybe I’ll get back to model railroading. The weeds in the yard used to be an issue. You’d worry about what the neighbors think. You know what? I don’t care what they think anymore. I’ll let those grow” he added with a laugh.

Even though leaving Yaskawa will be bittersweet, Tim is happy to see a great future for the company.

“We’re in great shape. Great product. Great organization. We’ve stabilized through the pandemic. It looks like we are coming through that just fine,” he said.

“It’s been an interesting transition. I used to think about how I am going to walk out the door. With the pandemic, I didn’t have to worry about that because we went to working from home. It is super weird to not have that closure. There’s an emotional tug. Most people knew I’d be retiring. But, you’re not at work with everyone sharing the memories. You’re home. Maybe that’s a good thing. Maybe you don’t want to talk about it too much,” he said.

“I don’t know how I feel about it all. But I know I hope to have an opportunity to stay in touch with the people," he said.

“One of the items that these long term associate retirements brings to mind as to why we all do this. The obvious reason is to feed, clothe and house ourselves and our families. But when you think about it, why here? Why so long? Sure, the pay is competitive, the work is interesting, the products are great – but other companies pay money and have interesting work (OK, their products are NOT as good). I like to believe that longevity stems from the family we have built here. Tim is a very important part of that family” ~ Mark Bernicky.